On June 8, 2014, at Vaclavske namesti in Prague, there have been conducted the Great European Yoga Cultural Performance YOGA DAYS OF GOOD DEEDS organized by the European Yoga Federation in cooperation with the Yoga Federation of Czech Republic. The performance is part of the wider action which includes Vienna, Prague, Belgrade and Novi Sad this year and it takes place at the central squares of the European capitals.
The participants of the yoga performance in Prague greeted major of Prague 1, with whose support and auspices the performance has been conducted.
The performance consisted of Surya Namaskar (Sun Salutation) series that yoga teachers and practitioners conducted along with the silent music and play of the members of Art Yoga Similiris group.
At the end of performance, all participants held their hands and formed a big heart in the center of Prague and sent a message of love. The performance was greeted by a great applause of all visitors.

The program has been led by Mgr. Helena Mitwallyová.

After the performance, at 18:30, Kirtan Group Samadhi held a concert in the hall in Melantrichově street 17b in the center of Prague.

Let there be love and harmony with the environment within us. 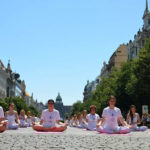 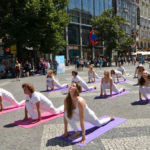 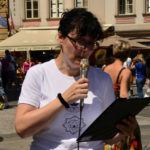 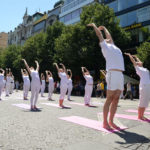 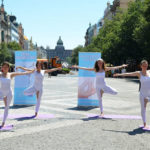 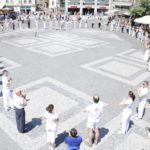 Yogis from all European countries gathered at the Schwartzenbergplatz in Vienna and Vaclavske namesti in Prague, performed Sun Salutation and inviteed all citizens to make good deeds.
Join us next year!