The Great Yoga Performance in Belgrade, 2015

The Great Yoga Performance in Belgrade, 2015

On June 27, 2015, in front of the National Assembly in Belgrade there has been conducted The Great European Yoga Performance – Yoga Days of Good Deeds organized by the Yoga Federation of Europe in cooperation with the Yoga Federation of Serbia. The performance takes place in Belgrade third year in a row as part of the wider action which also includes performances at the central squares of the European capitals – Vienna, Prague and Novi Sad this year..

The performance consisted of Surya Namaskar (Sun Salutation) series that yoga teachers and practitioners conducted along with the silent music and play of the members of Art Yoga Similiris group.
At the end of performance, all participants held their hands and formed a big heart in the center of Belgrade and sent a message of love. The performance was greeted by a great applause of all visitors. 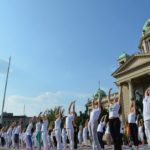 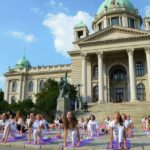 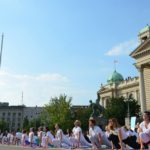 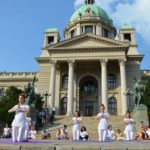 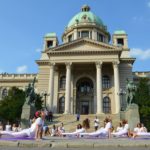